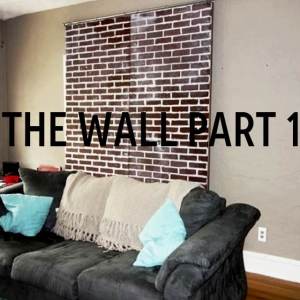 So as promised I worked on a rather large project this weekend.  When I was touring my apartment, there was a pair of French doors that were in the opening between the living room and the den. I liked the possibilities we had with those. Well, when I moved in last November the doors were not there. It turns out the people that were living there moved to my landlord’s building next door with the same layout and took the doors with them. So I had a big two door sized opening. That was all well and good, but when we started watching movies in the morning on the weekend the glare on the TV was intense.

And thus a project was born.

Here’s a photo of the doors that went missing:

And this is what that wall has looked like for the last 8 months:

Initially for this project I had a lot of ideas and simple fixes. We’ve been in the apartment long enough that we knew we needed to be able to use that space if we wanted, but block out the sun when we wanted a dark movie atmosphere as well.

I thought about just getting a tension rod and a set of curtains, but I did that in my apartment in college and the curtains would often get wrinkled, or stay closed for long periods of time and I didn’t think it fit our space.

I also thought about using a room divider screen. The problem is those can get expensive and most of them weren’t tall enough. I liked a few but I also felt like I didn’t know where I could store it when we weren’t using the divider.

And of course I thought about just recreating the door look all together. But the cheapest doors that would look appropriate in the space were $140.00 each. I understand now why my neighbors held onto theirs.

So for a while I was at a standstill, I knew I wanted a way to cover up the opening, but also leave it open. Then I started seeing all these sliding barn door tutorials popping up online.

Add that to my love for loft apartments with exposed brick walls and you then have the inspiration I needed.

Yep it sounds crazy. And after the amount of work John and I put into it, it is crazy.

Now I was inspired by the many bloggers I’ve seen who have made that faithful trip to Lowe’s to buy sheets of faux brick Masonite. And I like them did the exact same thing.

But I am an equal opportunity home improvement store shopper so we also went to Home Depot for a number of finishing touches.

Now I’m going to show you what this looks like. And if you want to endeavor in this project it is going to be in a few parts because there is a lot going on:  distressing brick,building a frame and hanging a sliding barn door.

This isn’t the thriftiest project I’ve done either. The price for the 2 sheets of brick Masonite, and the regular Masonite cost about 80 dollars. Plus the amount it cost for the other materials was about another 80 so we are looking at a $160 dollar sliding wall project. But if you compare that to the very large price tag on the sliding barn door kit : http://www.amazon.com/NW-Artisan-Hardware-NW-1-Sliding/dp/B00A2BZRZK $230.00 I feel like I saved a little. Plus that track is only 6 feet and mine is 10. And I got to make it brick. So there. 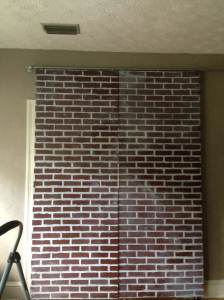 The wall closed, before furniture. 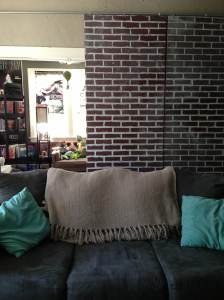 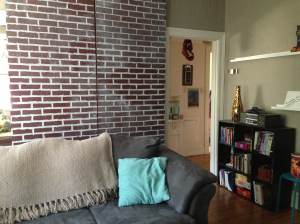 Next up how to distress faux brick. (the Crafty Cobra way)

And this project called attention to how empty those walls are! I’ll be filling those up with art soon! 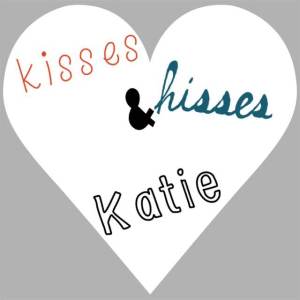 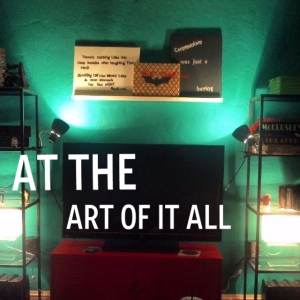 Adding art to your home.

I have always loved to decorate, whether it would be changing my room seasonally or decorating a new dorm room my first two years of college; I have always managed to find a way to give things my own personal style.

When John and I decided to move in together I had one pretty big request: That only one room would be covered in movie posters.

John lived in a very small studio when we started dating and it was covered from floor to ceiling in movie posters.  Here is a photo of the bed, but you can see the posters surrounding it:

It’s great for renting, but it doesn’t exactly scream design or a girl lives here too.  Plus getting all those posters down unharmed was a huge undertaking. So when we moved into our 2 bedroom apartment I decided that only the study/craft/reading room would be the poster palace.

That leaves a lot of wall space for art and design. As firm as I was about having the posters in just one room, I knew our art was most likely going to be related to movies, TV, and theatre.

So one afternoon I was browsing pinterest (which turned into hours browsing pinterest) and I came across some art projects I thought I could handle. And then I got a really awesome idea. What if our art was quotes from our favorite movies, tv shows, books and comics?

Now this is an ongoing craft project.  We are nowhere near done, but I did have an idea to put very specific quotes in certain places. All the Jurassic Park quotes will be in the bathroom. (Those haven’t been created yet because the bathroom is the biggest project left in the apartment) The Scott Pilgrim quotes in the kitchen. And so on and so forth.

So far it has been really fun to add personalized art to the place. It definitely makes it feel more like mine. Plus art is expensive y’all.

As we create more for the house we’ll post more pictures but for now I’ll add the photos of the ones we do have.

The first is from The Perks of Being a Wallflower, the second is from Batman Begins, and the third is from Clue.

Also I love lighting, but it is pricey! For our entertainment center I got 2 clamp desk lights on clearance from Target and voila! Cool gallery lighting on the cheap yo’.

I also love mirrors. They can get up there in price as well, but the door mirrors from Target and Walmart run about 5 dollars and they are really customizable. We added 3 over our bar area and it really looks awesome. 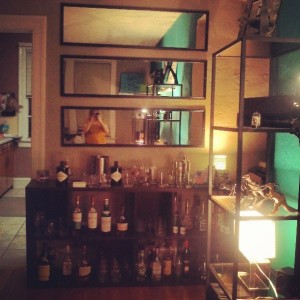 Bonus in the above picture you can see the gross old color of my kitchen.

This weekend has a huge project in store for John and I! I can’t wait to post all the details!!!

It’s no secret that I love coffee. I have my own milk frother/steamer and shakers

So it’s no surprise that I also love coffee mugs.

Now I know that many of you have seen the many blog posts about making Sharpie Mugs.

So simple, so fun. So easy even the most novice crafter could tackle this project.

Welp, that’s not the way the world works . Baking the mugs is supposed to set the design and make the mugs dishwasher safe. Well, I’m here to tell you that baking a mug covered in sharpie just gives you a hot mug covered in sharpie. A mug, that upon first washing will leave you with a messed up master piece.

There is hope.  There is a sharpie product that will stand up to a scrub or two.

Here it is in picture form.

And here are my mugs that my dear friend Kelby drew and I traced with the proper sharpie tools.

Just follow the same rules as above except replace Sharpie with Oil Based- Sharpie Paint Pen. (For Glass and Wood)

Feel free to comment and link me to your masterpieces.

This is a DIY and life blog for crafts, wedding fun, and gifts.